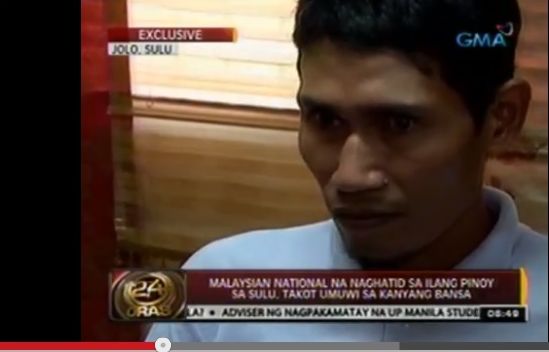 TAWI-TAWI: Malaysian Ricky bin Mohammad had helped Filipinos flee Lahad Datu, Sabah and escape to Sulu. But now he finds himself unable to return to his homeland for fear that they might jail him for helping Filipinos.

According to a report on GMA News’ “24 Oras”, Ricky and eight Filipinos made the journey from Lahad Datu in Sabah to Taganak Island in Tawi-Tawi.

Their journey was so sudden and secret, Ricky was not able to bring his Malaysian documents and passport along with him, GMA News reported.

According to the report, the Filipinos, upon arriving in Taganak, asked Ricky to join them in Sulu so they could introduce him to their families.

Ricky agreed, and they rode a banca to Sulu. However, when they got there, his Filipino companions left him, and he got lost.

Ricky said that he wanted to go home, but is afraid that he might get punished for helping Filipinos.

The local government officials of Jolo were grateful for Ricky’s help, and are now coordinating with NBI Interpol and informing the Malaysian Embassy in the Philippines of the situation.