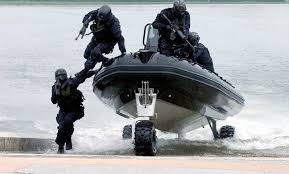 IGP: No casualty among Malaysian security forces
KAMPUNG TANDUO: The Sulu armed group was totally routed by Malaysian security forces' overwhelming firepower unleashed at 7am Tuesday, police sources said.
Malaysian security forces are at stage four of Ops Sulu as they secure the village which has been in the hands of about 100 armed followers of the self-styled ailing Sulu Sultan who had insisted that his brother, who led the group, to stay in Tanduo till the end despite extended deadlines given to them to give up and go home without bloodshed.
Negotiations to resolve the standoff failed peacefully and on Tuesday morning, fighter jets took to the air and pounded the village, followed by elite police teams who went in to finish the job.
The IGP told reporters at 11.30am that there were no casualty among the Malaysian side but the casualty numbers for the gunmen is still unknown.
The situation in all parts of east coast Sabah was described as under control by the police and the army who are on high alert at strategic locations as there have been threats of retaliation from the Sulu Sultan's followers that there would be retaliation if the Sulu intruders are defeated.