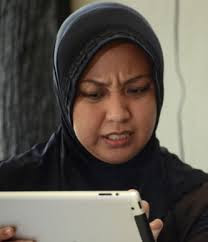 For the Kirams and their supporters, the “real conspiracy” was the one between the Aquino administration and Malaysia’s ruling party UMNO.

In a press briefing yesterday at the sultan’s Taguig City residence, his daughter princess Jacel called on the public not to believe the conspiracy theory being peddled by the government.

Najib and his UMNO are gearing up for Malaysia’s election this month.

Jacel said the administration has raised the conspiracy angle “purely for political exigency and popularity.”

“This issue to them is not important, especially on election time in Malaysia. To gain points instead of adhering to the call of the United Nations for a peaceful resolution, Najib did the opposite. He ordered a more ferocious offensive bombardment, ordering seven battalions to pulverize the Sultanate’s royal army, disregarding the preservation of life,” she said.

“Today, the imaginary conspiracy was propagated through text messaging to divert attention away from the true issue. The conspiracy theory is an insult to the Filipino people and to the sultanate of Sulu, more so to the Raja Muda (Agbimuddin) and his people,” she added.